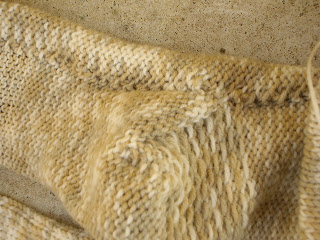 Loz likes the heel flap socks like she hand knits and
was asking can she make them on her KX35o.

So, my bright idea for Lauren's socks are done. I thought. And this is what I came up with.

They could be made on any single bed machine - just adjust stitch count and rows.

The cast on numbers are 20-24, depending on how wide the sock. I did this pair on T4, however, I think T3, 3.1 would be better. A tighter knit is usually preferred. However the thicker socks? Best experiment and see what is preferred. 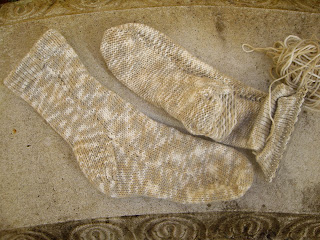 RC000. Set the KX35o to Partial knitting on the left side (flip the side lever up). Do that on the SK860, but also flip the dial to Slip. (Apparently Punchcard No. 1 does it automatically - Doesn't help if you have neither of these machine, but if making these on a standard punchcard? Good, go for it). 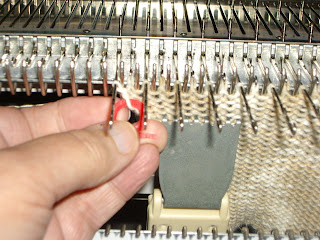 Ok back to doing the slip stitch heel flap.

Starting on L10, bring EON up to hold (so only they knit) PLUS THE NEEDLE ON THE OTHER END.
Knit 2 rows.

Now starting on R10 bring up EON PLUS THE OTHER END NEEDLE.
Knit 2 rows.

Repeat these four rows for (say) 22 rows. (Always - BOTH ENDS NEEDLES WILL KNIT) 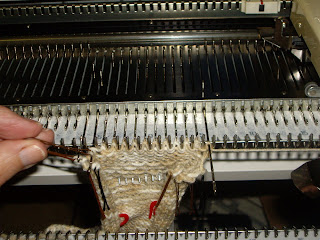 This bit is surprising tricky.

Starting with carriage on the right, identify your centre, and with your two prong tool, pick up the two stitches next to it and move them over 1 needle. (the handknitting equivalent of K2tog, K1.)
Either put the remaining needles on the left in hold, or slip them onto bobby pins etc.

Knit one row, bring the needle closest to the carriage out to hold. pick up the 2 stitches on the right and move them over one needle and remove the other stitches (exactly as you have done on the left). knit one row.

Now do this all the for the next couple of rows until all the stitches are back in work:

On the carriage side: bring the last needle knitted out to hold
on the opposite side: bring one new needle up into WP, put the first stitch hanging on the bobby pin onto the needle that was on hold last row and the second stitch onto the new needle.
(what you are doing is: Slip one, knit to last stitch held, knit it plus the next stitch together, knit 1, turn)

Picking up the stitches from the side of the heel 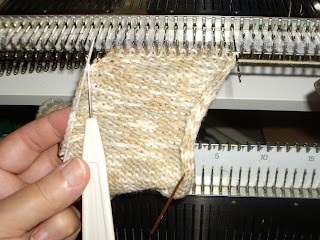 flap. 22 rows = 11 sts to be picked up.
I tried picking up the bar - but on the thick yarn, the bump is better. However - after the first one, it's very, very difficult to prize the little blighter loose, so I ran a thin needle up them all and they went on beautifully.

Do the same to the other side. It is a very big stretch, I made it almost to the end, but slipped a couple of bobby pins onto them, knit one row, then slipped them on and hand knitted them.
knit two rows very quickly - before it gets time to get cranky.

Now, doing the gusset. Fully fashioned is the norm. 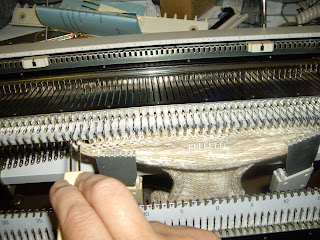 Each end. Pick up needle 3, put on top of needle two and move both over one needle and return the end needles to RP.

Continue until you are back to your original stitch count.

This is a bit of a guess - do xx rows to your toe. Somewhere between 40-50 depending on length of foot and how many rows done in the toe.

But before you do them, identify the correct bar to collect on the way back by putting a marker - bobby pin, paperclip, scrap of yarn on the bar before you start your toes.

Using the Sew-As-You-Go technique, continue knitting until you are at your cuff stage and match what you did when you began.

I've done step-by-step instructions into a PDF for her. I've popped it on Ravelry download, there are a lot more photos describing the technique.

Wonderful
A much simpler explanation than the one I paid too many dollars for!
I'll try these on my standard gauge and maybe bulky too - after the summer holidays.

By the way we have 8C here today and I took a photo to prove it! How cold is your "winter" down South?

Mary, it's a nice cold 15C!! I will upload the PDF for you. I've put in lots and lots of photos for my daughter to follow. If anything isn't clear, let me know and I'll do my best to fix it.